The 7th annual Screen Talent Europe Pitching Forum will take place at The Norwegian Short Film Festival Thursday June 9. Twelve emerging filmmakers will be presenting their projects in front of a jury and an audience. The winner will be awarded a production grant of 4 000 EUR!

Read more about the participants and their projects below. For more information about when and where the pitch is being held, visit https://kortfilmfestivalen.no/ 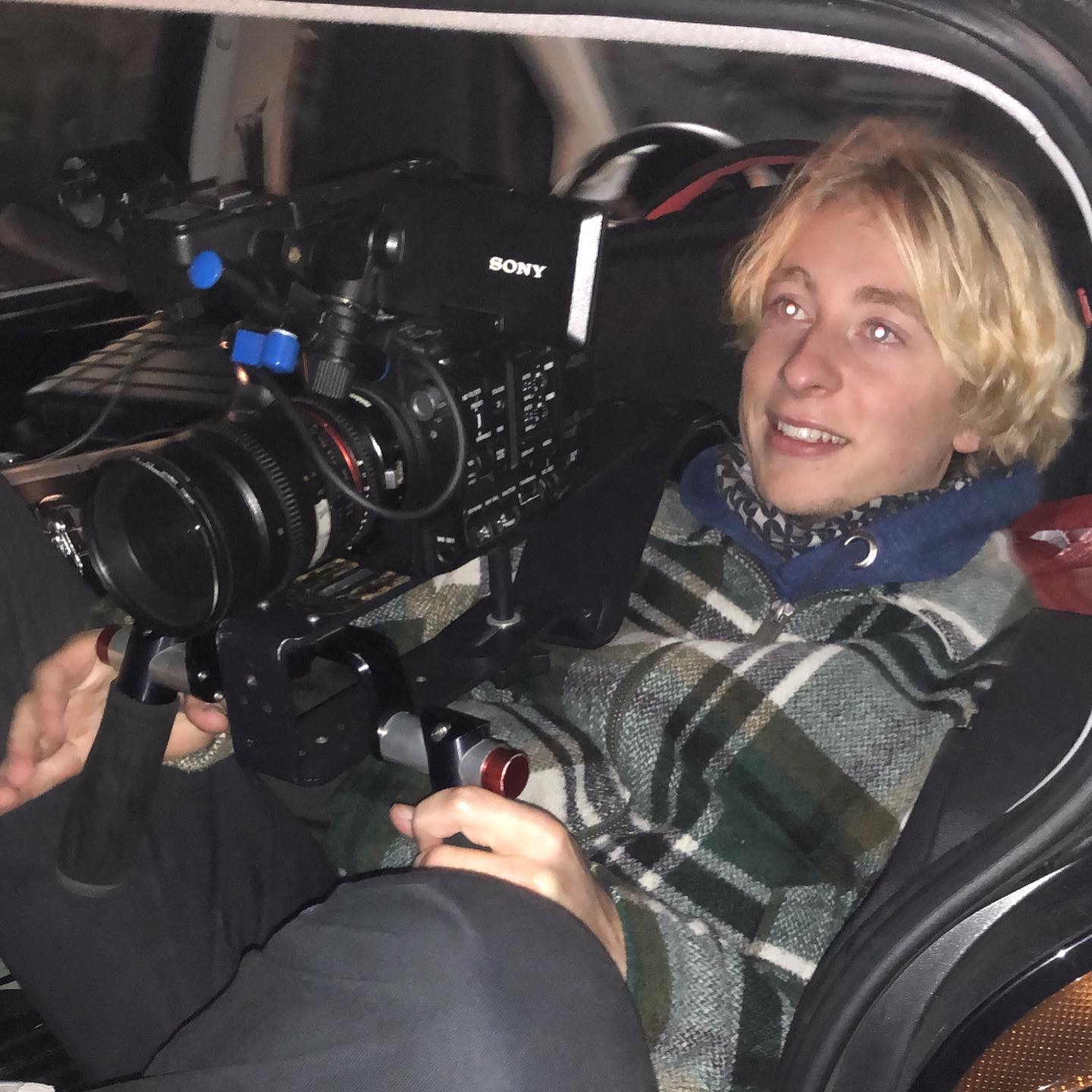 Frederik is a young filmmaker from Denmark. He works both as a producer and a cinematographer. He is energetic, creative and he loves meeting new people! He is hoping to meet, network and learn from new filmmakers from around Europe.

19-year-old Ingeborg lost her mother 4 years ago, she was her only parent. She has shut herself off from the world. Now she meets a boy called Alfred and has to deal with youth, grief and love.

Christofer is a child of the mid 2010's VDSLR music video boom, now working as a commercial director through the agency Bleck. Loves stories about denial, hypocrisy and rebellion.

A fed up food delivery chooses a split second act of rebellion - one that results in an awkward, spiraling dance between the classes of 21st century Sweden.

Lea wants to bring meaningful stories to life under the premise of feminism and diversity, while establishing a safe, fair and sustainable work environment. Since 2021, she is in the last year of her master’s program for film at Hamburg Media School. Along the way, she seeks collaborations with BIPOC directors and writers that share her visions and aesthetics.

Piggy Bank is a musical coming-of-age musical shortfilm about a Cantonese/Vietnamese mother and daughter dynamic taking place in an Asian family diner in Germany. Mimi (17) feels uncomfortable to be treated like a child. But on the other hand, she knows her mother does everything she can to give her a good future. It’s a story about two different generations, socialized in different environments and having contrary ways of expressing their needs, love, and desires.

Selma lives in Copenhagen and works as a Creative Producer at Angel Films. She works hard to manifest herself as a director on the side, as she writes and directs short films and develops TV-series. Selma strives to awake and visualize the characters' psychological dimensions and explore themes as perception, passion and mind hallucinations in her work. With sense for detail, sounds and lines she aims to unfold colorful and complex worlds and persuasive journeys in her work.

As Neel finds herself caught somewhere in her everyday life, she starts to daydream about seeking her passion as a writer. When she decides to quit her job, she is quickly lured back into her old life. As she's surrounded by a grey everyday-life-haze, her daydreaming intensifies and starts to confuse her sense of reality. From her misserability she forgets who she is. Until a small thought once again dares to glow.

“World cinema is the cheapest way to travel the world. I Tink the global access to the same streaming platforms, should be an invitation for film makers to create more local stories. “We all have the same window now, so let’s use the opportunity to explore the world together.” Arjuna has been part of the Danish short film scene for a few years now. He usually writes early in the morning when he’s too tired to overthink anything.

How far would you go to save your life´s work? that is question Chef Sis must ask herself, when the recession hits her catering company.

Jonathan is a screenwriter based in Limerick City, Ireland. Jonathan´s distinct voice has translated into surreal comedy projects that have strong universal appeal. He has received funding from the likes of Screen Ireland, The Arts Council of Ireland, RTE and the Broadcast Authority of Ireland among others for his writing work. His work has also seen him selected for workshops with Screen Talent Europe, Channel 4 screenwriting, The London Screenwriter´s festival and Creativ MEDIA Europe.

When mother and father sit Anthony down to hold an intervention to help him to kick his strange new habit, they have no idea just how quickly life as they know it will unravel.

Yana is a Swedish director from Ukraine. She is currently developing her debut feature film that captures voices from her home country. Her graduation film Lost in Kyiv from Stockholm University of the Arts received Filmstaden Culture Prize and Anders Sandrews Foundation Award. Yana’s work lays bridges between Eastern and Western Europe, aiming to create meaningful meetings through film and questioning what we thought we knew about one another.

Zhenya is a medical student who prefers Kyiv’s parties over studies anyday, but one day changes everything. A sudden air raid alarm goes throughout all of Ukraine and Zhenya’s first day of war is suddenly at his dorm.

Erik has an MFA in film making from Valand Academy in Gothenburg. His short films have been screened and won several prizes at festivals in Sweden and Europe. He has also worked as second assistant director on the features The Hypnosis (2023) and Sick of myself (2022)

The film is a comedy satire that explores what happens in a small town when different people react to something that is presented and perceived as an immediate danger - and how their world view is shown through the way they react to the situation. Who is trusted with telling facts about the world, and why?

Aurora is an actress, director and screenwriter from Norway. She is known for her short films “Det er lov å si nei” and “Two Faced”, where the former is being screened at this this year´s Norwegian Short Film festival´s as a part of the competition program. Last year she completed her master’s degree in acting at Bristol Old Vic Theatre School. She also has a master degree in architecture. As an actress she is to be seen in movies like “Hoggeren” “Natt til 17” the television series “Helt Perfekt” and last season of “Ragnarok” on Netflix.

A norwegian-somali 16 year old boy feels the need to grow up quicker when his older brother travels to university. Now he has to take care of his mother and become the man of the house. And men drive (so he thinks).

Kasper is a director, writer and editor based in Oslo, Norway. He graduated from European Film College in 2012 and earned a BA at the Norwegian University of Science and Technology in 2015. Since then, he has written, directed and/or edited several music videos, drama series, and entertainment shows. His latest short film, We Are Not Here (2021), was screened all over the world, including the Norwegian Short Film Festival, Cardiff Mini Film Festival and The Psychedelic Film and Music Festival in New York

Two old friends reunite for the first time in ten years at the local running track to run intervals, but they discover that their friendship may be past its expiration date.

Freja is a Danish writer and director with a passion for social justice and environmental issues. With her art she aims to inspire others to take action, start a conversation and find their own inner voice and superpower whatever that is.

As Idun Gade realises her boss' murderer is someone she cares about deeply, she must decide whether being loyal or being righteous is most important to her.

The Pitching Forum is organized by Mediefabrikken, the Screen Talent Europe Partners and The Norwegian Short Film Festival.

Mediefabrikken is a resource center for young filmmakers and a partner of Screen Talent Europe. Mediefabrikken gives feedback on scripts, lend out free production equipment and arrange various programs and workshops among others. Read more about Mediefabrikken and their work: https://mediefabrikken.no/

The Norwegian Short Film Festival is a short film festival with a competition program for Norwegian and international short film, short documentaries and Norwegian music videos. In addition to the competition programmes, they present retrospectives, organize panel debates and industry meetings, arrange workshops and seminars, concerts, boat trips and more. The festival is an inportante debut platform for many young filmmakers in Norway, amd for the more established ones, perhaps the most important showcase for free independent films: https://kortfilmfestivalen.no/en/